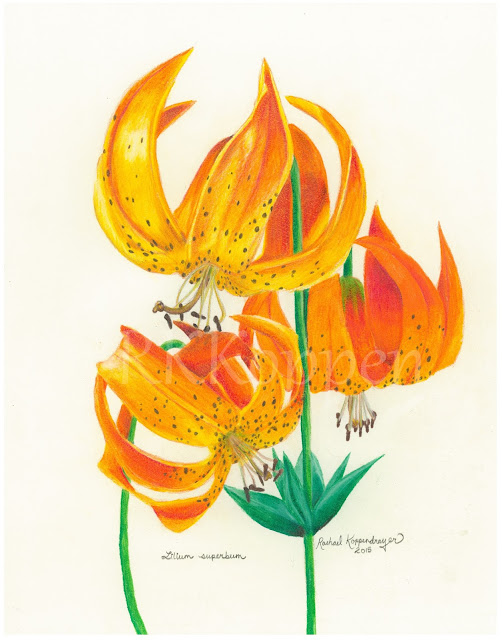 These wild lilies have long been a favorite of mine. Growing up we called them tiger lilies, since the spotted blossoms of Turk’s cap lilies share a striking similarity with the domestic tigers. But when I began studying and photographing wildflowers (around age 12), I learned that there is a difference–whereas the tiger lily is a robust garden plant imported from Asia, the Turk’s cap is a more slender native species found in swamps and wet road ditches–one that grows increasingly rare. However, they still bloom here and there in the road ditches of central Minnesota.

My first attempt at photographing the lilies provided one of the most spectacular photographic mishaps I’ve ever experienced. It was early evening, with the sun beginning to descend in the west and tinting everything it reached a golden orange. I was kneeling on an old minimum maintenance road, facing south as I leaned in with Mom’s Sears KSX Super manual single-lens reflex camera, and I took two photographs of the blossom, just in case the first didn’t turn out (this was before digital cameras, never mind good digital cameras). When we developed the film, it was not just two photographs of the lily that emerged. A trick of the evening light bending through both the lenses and the viewfinder double-exposed not only the flower, but also my own squinting face from behind the camera, creating two photographs that overlapped into a crazy panoramic. I doubt we could replicate it if we tried, but the resulting pieced photograph is a favorite of my mother’s.