Sometimes we do things without the expectation of anything coming of it; for me, submitting myself as an illustrator was one of them. And even when we feel called, as I did in applying to be an illustrator, the result of that calling doesn’t necessarily manifest in the way we expect.

But in this case, rather to my surprise, it did.

One evening, I opened up my email to find an invitation from WhiteFire Publishing waiting for me. Two of us from the illustrator pool were being considered to illustrate a book called Isaac’s Ice Cream Tree by Angela Henderson, and we were each asked to send in a sketch based on the manuscript. I only had one vision for the sketch, so rather than debate ideas, I went with it. It was not without trial and error–after sketching the tree and adding the boy, I realized the whole drawing should be skewed about 45 degrees, so I pulled out my paper cutter to reshaped the paper and taped triangles in the corners to make it a proper rectangle (a portion of the tree trunk is on one of these added triangles). Getting Isaac’s face right also was not easy, but in the end I was satisfied with it and scanned it and sent it in. (Thankfully, my tape job was not too obvious).

And that’s the sketch that the publisher and author chose. Roughly a week later, I received another email offering me the position, and not long after that, I received and signed my contract, and the process of illustration began! 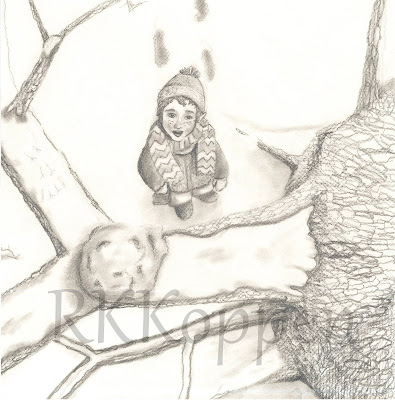 It turns out that illustrating a book is a fairly intense process, with a lot more to it than just whipping out a picture for each page. As I progress in the project, I’ll keep you updated!

Part 1: Becoming an Illustrator (what led me submitting myself to a publisher)
Part 2: The Initial Contact
Part 3: First Round of Sketches
Part 4: Edits and Color Roughs
Part 5: Final Artwork
Part 6: The Final Product, or: THE BOOK!